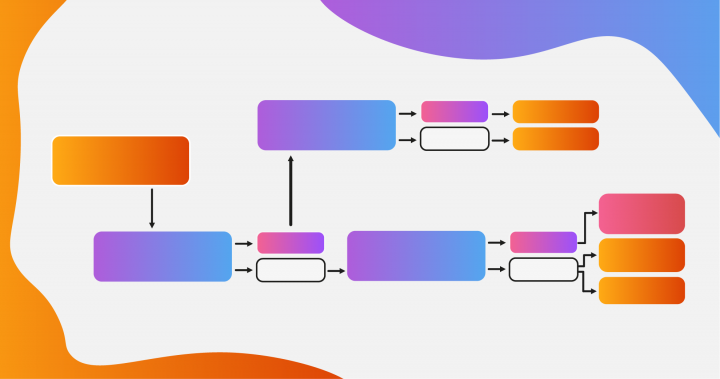 SEO performance isn’t always straightforward. Like all areas of marketing, there are ups and downs in KPIs.

When your organic KPIs do drop, you’ll likely be under pressure from clients and/or colleagues to have an answer, and a course of action.

In this article, you’ll learn what to do in various scenarios. Including when your rankings stayed the same, vs. when they slipped.

Here’s an overview flowchart to visualize the approach:

The course of action is different depending on whether your ranking positions have slipped or not.

Let’s start with what to do when the answer is ‘no’, but your KPIs have dropped regardless.

If your main KPI dips but your rankings don’t, it can be puzzling.

Here’s what you can look into in this scenario.

1. Is your tracking still working correctly?

Take a look at Google Analytics, Tag Manager events, and your customer data platform if you have one.

This is the first place to look. If your tracking is indeed broken, it’s bittersweet — the good news is that your KPI probably hasn’t actually dropped. The bad news is you’ve lost some data, and need to redirect some resources to get it fixed.

If tracking still looks good, then let’s move onto the next check.

Not every search query is consistent throughout the year in terms of volume.

A lot of B2B keywords dip during December & August, for example.

Some outdoor activities are seasonal, e.g. fishing, hunting, mountaineering. Foods & recipes go in and out of season, and so on.

How to check if search demand dipped

Impressions in Google Search Console will give you some insights here.

Head into the performance report in Search Console, and set an appropriate date range. For example, you may want to use one of the default comparisons (e.g. 28 days or 3 months).

Now, looking at the last 28 days vs the previous 28 (or whichever date range you’re using), you want to check if impressions are down.That might be sitewide, or on specific pages. Narrow your focus depending on what you’re investigating.

If your positions and CTR have remained similar, but impressions are down, that indicates there were simply fewer searches in the recent period.

If that is the case, then it’s worth looking at year-on-year trends. Does this happen every year, or is it something new?

Use a tool like Ahrefs or KWFinder (KWFinder tends to have better trends data) to check the history:

In this example, you can clearly see that demand is lowest in the summer, and peaks in autumn each year. With that data, you can account for it in your traffic forecasts.

In these scenarios, I wouldn’t suggest trying to ‘fix’ anything. Simply feel assured that nothing is wrong with your site & rankings, and think about diversifying your content. Find topics that are either evergreen, or have a different seasonality so that your total site traffic isn’t hit as hard during the troughs.

If it turned out that search demand is the same, what else could it be?

These are the next places to look:

Has your conversion rate dropped on key pages? Maybe something about your content has changed lately:

Maybe you have some UX issues:

Check your conversion rates in terms of a percentage. If it’s down by a significant amount, there’s probably a reason for it. Dig around your site. Check your key pages in incognito, and see if you can find the issue.

Remember that if you’re working with small numbers of conversions, things will fluctuate a lot anyway. Before jumping the gun, make the drop is sustained. Week-to-week changes might not be enough to justify taking action.

Another thing to check is cannibalization. Cannibalization happens when you have more than one page in the SERP, competing against each other.

It’s possible to cannibalize with organic results, but also with PPC.

If you have two pages ranking organically in the SERP, then your total KPIs should in theory be similar. One page might experience a drop, while another will gain. In that case, you can add a canonical tag to select which one you prefer to rank (whichever converts the best).

Don’t forget about PPC too, though. If you’ve launched a new paid ad campaign that targets keywords you’re already ranking for organically, there’s a good chance your organic channel KPIs will drop. Some of those conversions will start getting credited to your PPC channel instead.

This can happen with dynamic search ads in particular. If you’ve accidentally started bidding for keywords that you already rank for, consider adding an exclusion to your DSA campaign.

Dealing with a KPI drop due to lost rankings

So what about if your rankings did actually drop? Well, on the bright side, at least you know why your KPIs are down. Rankings dropped → traffic dropped → KPIs dropped. Straightforward.

There can be various reasons why your rankings might slip. Here’s some things to think about.

How to diagnose a ranking drop

First of all, before you start tinkering & making changes, ensure that your ranking drop is sustained.

A ranking graph is rarely a smooth diagonal line up and to the right.

More likely, there’ll be ups and downs along the way — sometimes big ones.

As you climb from position >100 up the SERPs, it’s common to see a drop, followed by bouncing back even higher. Don’t get too caught up in the day-to-day.

But let’s say the drop is in fact sustained.

You’ve checked your SERP tracker and your Search Console data, and you can clearly see that positions have slipped.

The cause is either going to be related to your site directly, or the SERP landscape more broadly.

Issues with your site

Start with the basics. If there’s something fundamentally wrong with your site, it’ll undoubtedly affect your rankings, but it could be easy to fix. Check for:

If you’re still all good so far, think about recent changes to the site. Have you done anything that could impact rankings?

Retracing your steps could lead to a lightbulb moment relating to something you’ve changed.

If the change isn’t directly related to your site, then it’s time to look at the SERP.

Issues in this category can be trickier to identify & more resource-intensive to fix.

Let’s run through some scenarios which might be affecting your rankings.

1. Has the dominant search intent changed?

When someone types something into Google, Google is pretty good at figuring out what they’re looking for.

For example, if you typed ‘fish oil’ into Google, you’ll find sites like Healthline & WebMD ranking at the top. Their content is related to the health benefits, uses, and side effects of fish oil.

There could be other reasons to search ‘fish oil’ (e.g. to buy), but Google has determined that this is the dominant intent, and therefore that type of content will rank.

Look at your SERP, and look at who ranks above you. Is the search intent they’re writing for different from yours?

Is their page a listicle, while yours is a landing page?

Do they have templates, and you don’t? Examples? An interactive tool?

Whatever it is, check if you’re missing something that is required to properly satisfy the intent for your target keyword.

We all know that backlinks are still a major algorithm factor.

All other things being equal (similar on-page, similar intent targeted), the backlink profile of a site/URL is likely to be the deciding factor.

There’s not much more to say on this one.

If you’re being outranked due to backlinks, then build more backlinks. Estimate the potential KPI uplift you might see if you were to take the top spot for that keyword. Is it worth the effort?

3. Have the SERP features changed?

‘SERP features’ refers to things like featured snippets, images, videos, ‘people also ask’, and other things you might see in the SERP.

This point is pretty similar to the first, regarding search intent, and it simply requires you to take a look at the SERP to see what’s going on.

Perhaps there’s a featured snippet where there wasn’t one previously. Who has it? What is the snippet? E.g. a ‘what is’ definition? A step-by-step ‘how to’? A list of tools or tactics?

Whatever it is, you can reverse engineer it to try and grab the snippet for yourself.

Maybe you’ve started to see video content above-the-fold in the SERP. If videos are outranking articles for your target keyword, then once again, you have a decision to make. What is the estimated KPI uplift if you ranked #1? Is it worth going to the effort of producing video content to rank?

SERPs will keep changing, and sometimes we need to adapt with them.

What about algorithm updates?

“Has my site been hit by the latest algorithm update?”

It’s true that a ranking drop could be caused by an algorithm update.

In general though, getting a ‘yes’ or a ‘no’ as to whether your site is hit by an algorithm update isn’t helpful on it’s own.

You still need to go ahead and figure out what the algorithm update was targeting. How, exactly, were Google trying to improve their SERPs this time? Their guidance for core updates is usually pretty vague these days, so you’ll need to do some digging, listen to chatter in the community, and come up with your own hypotheses.

Chances are though, it’s going to be related to search intent. Go back to the step above, look at the SERP, see who’s outranking you, and figure out why.

I'm Ryan, a SaaS SEO. Previously in-house at Toggl, I'm now focusing full-time on SEO growth strategy for SaaS brands at Skale. I started this blog to share everything I'm learning in the world of SaaS SEO growth & marketing tools.

Influencers are the modern key to launching and amplifying successful marketing campaigns. Unfortunately, reaching out to them and coming to an agreement is challenging if you’re not representing a famous brand. Waiting for a response from these social media pros can add extra stress to the overall pressure of building your marketing campaigns. There’s good news: plenty of tools and strategies...

Merging the goals of a content marketing strategy and SEO strategy depends a lot on solid content briefs. An effective content brief serves as a roadmap for content writers to produce content that is search-optimized while still allowing freedom for writing style and subject-matter input.  I work with top SaaS brands to boost their organic traffic and hit KPIs with a solid SEO content strategy —...